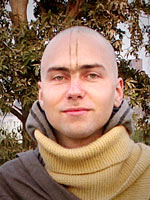 What does Madhava do here?

I spend much of my time translating and editing various texts related with the tradition of Sri Caitanya. I am presently mainly involved with the publications of Sri Krishna Caitanya Shastra Mandira, mainly the works of Pandit Sri Ananta Das Babaji Maharaj. In addition, I maintain a number of related websites, and try to make my living as a web designer & programmer on the way, too.

Despite my currently less-than-mediocre (and hopefully constantly improving) skills of Bengali and Sanskrit, I strive to produce translations with a good degree of integrity, hoping to make a positive contribution for the growing audience of students of the theological works of the Caitanya tradition.

TIMELINE
1980 Summer - Born 11th of June, 6.31 AM.
1986-1995 - Primary education in Pitajanmaki and HSYK (Helsinki).
1992 - Initial interest in the study of religion and culture, both in general and Asian in particular.
1994 - Came in touch with ISKCON, started chanting.
1995 Summer - Joined the local ISKCON ashram.
1995-2000 - Living in the temple as a brahmachari, doing mainly traveling and book distribution. First and second initiations from Suhotra Swami. First visit to Navadvip and Vrindavan.
1999 Summer - Had a serious disagreement with guru and GBC over the spiritual standards expected of a guru. Became a persona non grata in certain circles.
2000 January - Married with Malatilata dasi. Moved out the temple.
2000 - Spring - Traveled to Navadvip and Vraja, stayed for one and half months, rest and parikrama after the exhausting past six months.
2000 June - Met BV Narayan Maharaja, ran headlong into first and second initiations as was the tradition in the group.
2000 Kartika - Third visit to Vraja, participated in Vraja-mandala-parikrama with Gaudiya Vedanta Samiti
2001 - Put together the first extensive websites for Gaudiya Vedanta Samiti, traveled on several occasions to meet BV Narayana Maharaja.
2001 Autumn - Became dismayed by the group's mood and rhetoric, inquired about the critique of babajis, began a thorough investigation into the matter. First contacts with the Gaudiya tradition out there, began studying the works of Sri Ananta Das Babaji Maharaja. Became an apostate. :)
2002 Spring - Traveled to Vraja, stayed at Radha Kunda for two months. Met different sadhus, studied the scanario. In the end of the visit, received harinama from Sri Ananta Das Babaji Maharaja.
2002-2003 - Started my first Gaudiya-website, raganuga.org, followed by several others over the next year or so, including this one. Began working with Gaudiya Grantha Mandir.
2003 Spring - Fifth visit to Vraja, stayed at Radha Kunda for three months, receiving diksha and siddha-pranali, and my sweet Giridhari from Baba. Studied shastra, consulted Baba on a daily basis, coordinated the printing of three books. Didn't have time for parikrama this time as much as I'd wanted to, though to Govardhan of course we went frequently.
2004 - Still alive and around. Heading to Vraja this Autumn for several months. Working on various publications from SKCSM.

·  This website is a part of the Gaudiya.Com Network  ·